Remember when you were a kid and someone had a piñata at their birthday party? Remember when the piñata would finally break (and hopefully no one had been hit in the eye) and you would all dive in to find the best pieces? That’s what the past four days of apartment hunting have been like. In theory, finding an apartment in Bamako should be easy. There certainly isn’t a shortage of apartments but the thing is, Bamako is HUGE (actually, it’s not, it just feels like it is).

Here is a friendly guide to finding your own Bamako apartment, should the need arise.

First, figure out where you want to live and how much you’re willing to spend to get to work. One of the best neighbourhoods is called l’Hippodrome, because it’s close to most clubs, tasty restaurants and boasts 3 of Bamako’s 4 grocery stores (more on those later). If you work in l’Hippodrome (which I do), you’re golden (which I am). Easy peasy – find a place where you can afford to live, and walk to work every day. The problems arise when you don’t work in the neighbourhood where you want to live. Take for example Caro, my new roommate (more about her later). She works in Bamako’s newest neighbourhood, ACI 2000. It’s the most modern neighbourhood – it’s got the fancy office buildings. Problem is, it hasn’t really got much of a population. No women carrying baskets on their heads, no kids running everywhere, no chickens pecking their way down the street. At night, when everyone has left work, it’s deserted. Which is frankly worrying for a solo white girl who might want to go out at night once in a while. The other problem with ACI 2000 is that it’s kinda central, but nothing else is, so taxying there from anywhere else will cost between 1250 and 2000 CFA each way (here’s a nifty currency converter to help you out today). So, where do you decide to save and when do you decide to spend? Do you shell out 2000 CFA per day (40,000 per month!) to get to and from work, or do you choose to live close to work and forgo most nightly activities? Lucky for me, Caro decided that she wanted to live in Hippodrome and enjoy a social life, so we set out together to find an apartment.

Second, find someone who speaks Bambara to help you find a place. Like I mentioned in language barriers, not everyone in Bamako speaks French, which has turned out to be a hindrance so far. In Bamako, we have discovered 4 ways of finding an apartment. 1, ask your fellow expats or join something called La liste d’Estelle, this word of mouth thing where you get daily notices telling you about stuff for sale and things to do in Bamako. 2, find an agency and get them to find you an apartment. Thing is, their fee is normally one month’s worth of rent. 3, find a coxer. These are gentlemen whose offices consist of a chair under a tree, who get paid by landlords to bring people to their houses. They generally charge between 1500 and 5000 per visit, but I’ve also heard that the landlord gives them a cut of the rent (i.e. the rent is boosted). 4, talk to the guards on streets that you like – most villas have one or many guards outside the gate, and they all know each other and are usually quite good at suggesting available housing.

First, we asked our fellow expats. They all said “hmm, I don’t know of anywhere, but have you joined La Liste d’Estelle?” No luck there yet, so onto solution #3 – we found a coxer. We had my colleague Diara help us with our search (I’ve finally learned motorcycle man‘s name!!) so he could let us know what the landlords and coxers were saying. This little short man (the coxer, not Diara) would drive ahead of us on his motorcycle and show us places. On Friday, we saw three separate places, all terrible. They were either too far, too dirty or too expensive, or all three. I’ve kind of erased the memory. It also turns out that in Bamako, just like everywhere else, you have to furnish your own apartment and pay for utilities (I don’t know why that surprised me). It seems like a bit of a waste, especially to me cause I’m only staying for a bit over 5 months, but we can’t afford any of the furnished places, so we had to lower our prospective rent budget to leave ourselves with enough left over to furnish our new place. On Saturday, we found a wonderful, wonderful place. Three big rooms with private bathrooms, a large kitchen, a nice garden and a guard already living there, and it’s next to the best pizza place in Bamako. We got carried away and started picturing ourselves living there, and then on Sunday found out that the rent, which doesn’t include anything, is 300,000 and absolutely non-negociable. See, here’s our problem. We’re like the little kid who can’t get through the wall of big kids to grab any of the candy from the piñata and gets stuck with the leftovers that no one wants. A lot of people who live here have a healthy budget for living expenses. I, however, receive 1200$ a month and Caro doesn’t make much more, which doesn’t leave us with much wiggle room. Landlords are therefore unwilling to reduce the rent, as they know that the next expat will be able to afford the place. After receiving this news on Sunday, I decided to give up for the day – I was tired and I have a tonsil infection and it was really hot 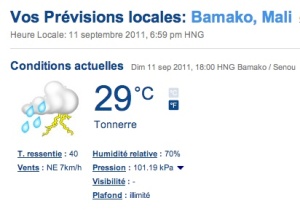 and I didn’t care anymore, so I went to Caro’s hotel (she’s being put up for free for 15 days until she finds a place to live) where I got to have a hot shower and use her wifi and enjoy her air conditioning. Sunday was a lazy, lazy day.

This morning, I went back to work for a bit and had a meeting to discuss my duties here (more on those later) then went to the doc to get my prescription – I had to wait 2 hours this time, not as charming an experience as last time. From there, I met up with Caro and we went to see a couple more places. We saw our first acceptable place within our budget, but didn’t like the feel of the street, so gave that up. Then, our coxer showed us the most random place we’ve seen so far, which was more like office space than living space, and we decided to leave and not pay him (he’s gotten 4000 CFA from us so far). Diara agreed with us and yelled at him about what he showed us, telling him he didn’t deserve anything. Then, we went back to my place where my houseboy was waiting to show us somewhere. We finally found a place that we were happy with! A cozy second floor apartment with two bedrooms, a living room and a rooftop terrace, and well within our price range – 70,000 per month. We set up a meeting to talk to the landlord tomorrow and set everything up.

Then, we came back to my place and started talking and…

So, after all the running around this weekend, we decided to stay right where I am. There was a French man here who moved out two days ago, and Caro will be moving into his room on Friday. Our rent is 100,000 each per month, and it includes breakfast, access to a full kitchen (which they will clean and prepare by the end of the week – Alice pays extra to eat with the family, so there was no need until now), a lovely outside sitting area, a full set of staff (a cleaning lady, a cook, two houseboys and a guard), access to an office with the internet and a printer, access to the TV and it’s 40 or so channels, room cleaning and sheet changes whenever we like, and laundry for 1000 or 2000 per week. The house is cleaned daily, which means no bugs, and across the street is a little shop that sells water and bread. If anything breaks or needs replacing, there are a bunch of people we can ask for help, and it’s all included in the price. We feel safe and comfortable here – kind of silly to pass this up!

We’ve committed to staying at least until October 15th, when we will decide what we want to do – maybe we’ll stay here until I leave in February, or until Caro’s fiancé arrives. Maybe someone we know will leave their place and we’ll take over. We’ll have a better idea of what we’re looking for, we’ll have gotten more messages from Estelle, and we’ll hopefully speak a bit of Bambara by then!

I’ll sign off for now so as not to overwhelm you (which I probably already have – maybe I should be a novellist), but I will eventually tell you about grocery stores, restaurants, Caro, my work, and Bamako’s wildlife, I promise!

The views and opinions expressed on these pages are mine and do not reflect those of any organization mentioned. If I say something stupid in the future, it’s better to be able to point out that the stupidity is mine, and mine alone.
Loading Comments...
%d bloggers like this: