Update from yesterday : credit card-y things sorted themselves out late this afternoon. What a relief!

While I was waiting for everything to get sorted, I went to the West Edmonton Mall, which was awesome. Friends have often pointed out that it’s weird that I love shopping so much, because it sort of clashes with all of my other passions and beliefs. I don’t get it either. It’s not even buying stuff – I just like being in stores. I didn’t actually buy anything today, I just walked around for hours (which you can definitely do at WEM!)

While meandering, I stumbled upon World Vision’s One Life Experience. 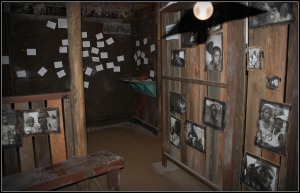 It’s an interesting concept. They’ve (kind of) re-created an African village. When you walk in, they give you an ipod to listen to, as someone recounts a story of a now-sponsored World Vision child – stories of rape, kidnappings, etc. I’m still not sure what my impressions are. I tried to put myself in the mind of someone who doesn’t know about these issues. I can imagine that it could be scary, or touching, or painful. This blogger has a good post about the exhibit, saying that it’s not an accurate representation of the African continent (check out the rest of the blog for more amazingness). However, One Life only claims to tell you about one child’s story, in their village, and I think that this exhibit was effective in communicating that one child’s life/village/experience. World Vision needs to fundraise, after all, and if that’s the way forward, then more power to them. It’s better than showing pictures of starving children with a sad voice-over – at least the pictures in the final station were of smiling, chubby children.

I’ve spent a lot of time talking with people in this field about the effectiveness of intervention and aid. A lot of it is dramatization and trying to pull at people’s heartstrings, and the question I always end up with is this: What’s important? That the people who were at the mall today felt pity for these children, or lucky about their lives, or even inclined to sponsor a child? In this case, I don’t think so. I think that the most important part of this exhibit is that at the end of the day, a few more people will find out that child soldiers and everything else in the exhibit do exist. Sure, they’re not representative of the entire continent, but they are a real issue, and at least WV is bringing attention to them.

I also met this girl, who is fasting for a month, or until she raises $3500, to feed kids in Haiti. Click on the link for a more eloquent description of her adventure.

The views and opinions expressed on these pages are mine and do not reflect those of any organization mentioned. If I say something stupid in the future, it’s better to be able to point out that the stupidity is mine, and mine alone.
Loading Comments...
%d bloggers like this: